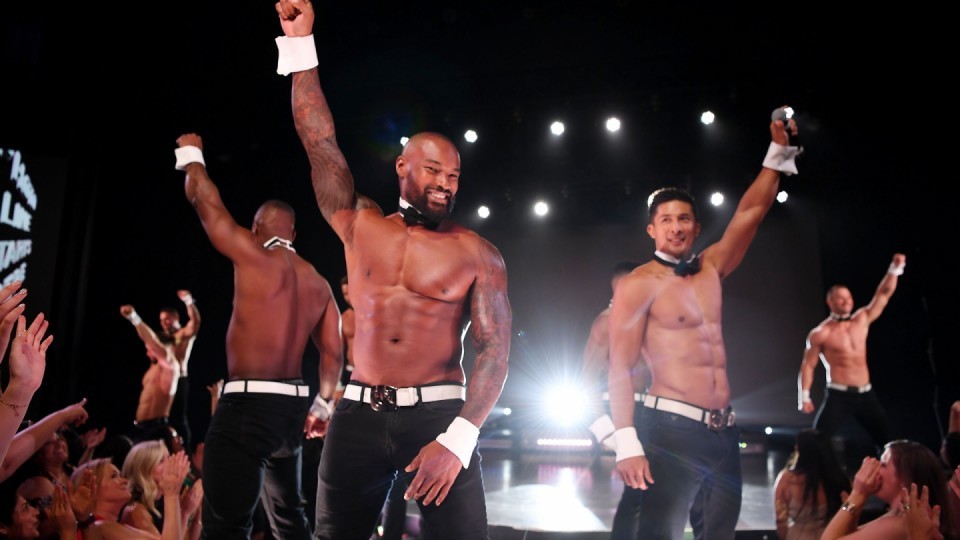 “This cast is my extended family,” says Beckford. “There’s not a time I’m in Vegas, even when I’m not doing the show, that I don’t come by to see the guys, my brothers. From the first day I walked into this theatre I’ve felt at home and being back really feels like I never left. And to perform for 300-400 people every night is such a great confidence booster.”

The “Tyson Takeover” weekend included not only the typical Chippendales audience of bachelorettes, birthday girls and divorcees but dozens of Beckford’s fans who can’t get enough of the actor and supermodel’s charismatic presence and talent or, those who missed him the first time around due to sold-out crowds.

The opening reception was held at the Flirt Lounge inside the Chippendales Theatre Complex at the Rio and featured Beckford and the cast of Chippendales mingling and taking photographs with partygoers who were enjoying signature cocktails.

While on the red carpet Beckford shared news about two upcoming projects – the film “Singleholic” which will premiere in 2019 and a new Netflix comedy, “Huge in France,” co-starring John Stamos. In addition, he shared his advice for his son Jordan Beckford, who recently made his runway modeling debut during the Tommy Hilfiger show in Shanghai.  Tyson also shared his workout and diet routine to maintain his buff bod at the age of 47.

“We are thrilled to bring Tyson back,” says Kevin Denberg, Managing Partner, Chippendales. “Our audiences have grown accustomed to Tyson; his star-power, charisma and sex appeal are the perfect compliment to our already sexually charged show.”

The critics agree that Tyson was the one the girls wanted. After his debut with the Chippendales in 2015, the Las Vegas Sun commented,  “Fans of Beckford will not leave the show disappointed, as he not only flexes his buff bod throughout the adult male revue, but also bares his backside in a solo act with a female member of the audience…Beckford fits like a glove in Chippendales.”

The Chippendales have recently revamped their show with new numbers, music, and high-flying acrobatics. The already sexy production is now amped to hot and heavy heights with the return of Beckford. The dynamic lighting and musical staging is on point and the signature strip style, combined with edgy dance moves and pop music make Chippendales an audience and critic’s pick!

Every naughty fantasy you can imagine comes to life in a dynamic, immersive environment, perfect for any Girls Night Out occasion. Women looking to celebrate their bestie’s bachelorette party in Las Vegas, their big birthday bash or just a wild night out, Chippendales shows are the ultimate way to let loose and have fun.