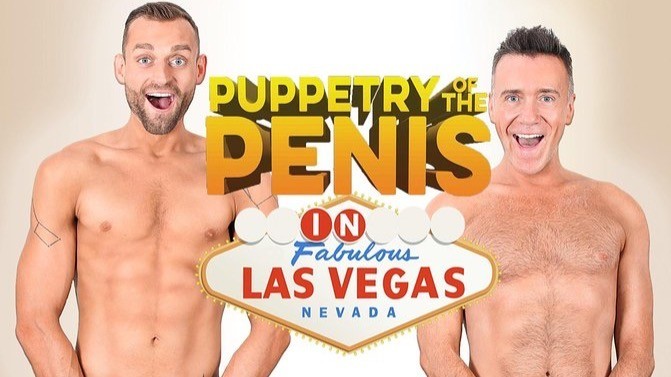 Puppetry of The Penis Celebrates 1000 shows in Las Vegas!

PUPPETRY OF THE PENIS, a show which Vanity Fair called “dementedly good fun!” requires astonishing stamina, an unbelievable stretch factor and an amazing level of testicular fortitude. The show leaves women and men gasping with more than 40 heroic and hilarious installations, including crowd-pleasers, tourist attractions and food products, such as “The Pelican,” “The Windsurfer,” “The Eiffel Tower,” “The Loch Ness Monster” and their signature creation, “The Hamburger.”

PUPPETRY OF THE PENIS is first and foremost a comedy, a non-sexual adult show. It is the only show in Vegas that features full-frontal male nudity!

“They recently appeared on “The Tonight Show,” which is perhaps the closest thing to an official seal of approval from the mass culture.” The New York Times

“The tone for the show: sassy, off-color, but never crude.”  Variety

“LA has embraced the penis. A phenom. Totally sold out.”   KFI Radio, LA

“Does exactly what it says on the packet…unbelievable.” Financial Times, London

“...shocked me into uncontrollable fits of hysterics….” Time Out, London

“charming … extraordinary … DON’T TRY THIS AT HOME!” THE GUARDIAN, UK

“Sold out to the rafters … the women SCREAM and SQUEAL” THE MAIL ON SUNDAY, UK

“… gently witty … surprisingly charming … done with a high degree of decorum … in the best possible taste. They may be flashing their genitals but they keep their socks and beanie hats on.” THE GUARDIAN, UK

“BEST NEW SHOW ON THE WEST END” THE GUARDIAN, UK