I was born intersex. It is a condition in which a child is born with reproductive or sexual anatomy that doesn't seem to fit the typical definitions of female or male. I came to America seeking asylum because the condition made me a target in my country, where being associated with the LGBTQ community is illegal and could get you killed. There, people are bullied into remaining in the closet. They can never reveal their true identity, leading many to commit suicide or endure the endless pain and feeling of constant rejection. 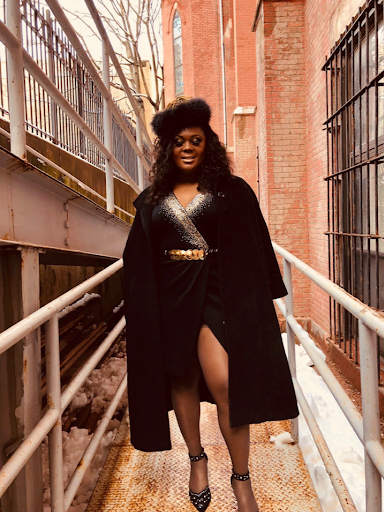 At first, my parents did not know I was intersex. In Zimbabwe, we don’t have specialists trained to spot the condition in children. They decided to raise me as a boy—until I got my first period when I was in school wearing a boy’s uniform. It became evident to my parents then that I was a woman, something I had long known and accepted about myself. I never doubted it. But I didn’t have any tangible evidence to prove it. Having my period provided me with what Oprah Winfrey would term an “aha moment.”

How I wish that moment had happened earlier in life. The week I got my period, I had to change schools because every student began bullying me, drawing pictures of me, making fun of my body. Still, my parents, trying to protect me, convinced me it would be best to continue identifying as a boy. They knew the community wouldn’t be kind. But the bullying continued because I was developing breasts. I tried to hide them under bandages. That didn’t work, either. Then I lived as a transgender person. But that didn’t feel quite right.

After college, I moved South Africa, where I knew I could probably find a doctor who would understand. I did. He confirmed that I was intersex. That led me back to Zimbabwe, where I started running an organization for intersex and transgender people called True Identity. I wanted to join the fight for equality for people like me.

At first, I started secret support groups because such advocacy was still illegal. I began receiving funding and tried to create a dialogue between the community and transgender and intersex people. I wanted to foster understanding and awareness. I wanted more people to see it as normal—because people like me are normal. That didn’t stop me from being physically and emotionally abused for doing that kind of work. Sometimes, the police would raid our offices. Sometimes, people would say: “You are an abomination to the culture. You are the reason we don’t get rain. You are a taboo.”

I had to leave when it got too dangerous for me and my parents.

My father gave me his last dollar.

“I will buy you a ticket,” he told me. “Go somewhere where you will be accepted as a human, and a citizen who deserves human rights.”

At the time, Barack Obama was president.

“If Obama hears of you, he is going to meet you and you will change the world together,” my father said.

Oh, the dreams and hopes of a loving father to his queer child.

Ellen DeGeneres, one of my favorite people in the world, is a lesbian—and has her own show here. Oprah, a black woman, has been killing it for as long as I can remember. That’s why I had hope in America, believing it would welcome me with open arms. The United States is the land of dreams, after all. That’s what we’ve always been told.

That’s not what I found.

When I got to Los Angeles, I didn’t know anyone and had only $60 in my pocket. I used that money to get to the L.A. LGBT center.

“I am homeless,” I told them. “I have no dinner tonight, I have nowhere to sleep, will you please help me?”

They didn’t help. I slept outside of the center for two nights.

I asked for help on my Facebook page. Someone in New York answered, said they’d buy me a one-way ticket to that city. Once there, I began couch surfing and wondered what I had gotten myself into. I had no money. As an asylum seeker, I was not allowed to work. It took me a year to get work authorization and Social Security.

President Donald Trump says immigrants are doing illegal things. But how does he expect them to live if they aren’t allowed to work?

America didn’t welcome me; it didn’t even understand me. Americans don’t know what intersex means. That includes many within the LGBTQ community, the community where I was supposed to find empathy and love. And it includes the black community.

Most of the intersex people I’ve met in America are white. Intersex people are not celebrated in communities of color. We are not represented on their platforms, in the media or anywhere else.

It hurt even more after I found out about intersex infants here who are forced to undergo unwanted surgeries that violate their bodies. When those children grow up, they will have felt robbed, as though their body, their voice, was stolen from them before they could even speak.

I knew then my job was not finished, that I had to speak out.

Still, I want to speak. I want to learn and grow—and raise awareness. The only way we can break barriers is to familiarize people with intersex people, show them it’s biological, that it’s not a choice.

As a black woman who is an intersex, immigrant asylum seeker, it feels as though America was built to silence me. Though I’m allowed to work now, the asylum process takes years and I can’t visit my parents until that is resolved. And I miss them dearly. But I have work to do here. Ignorance and hate and stigmatization will not stop me. I represent too many voiceless human beings who live with unbearable pain.

Thank you to The Root for hosting my story and giving me a platform. Here is a link to the post.

Tatenda Ngwaru is a Zimbabwean intersex activist and asylum seeker now based in Boston. She is the founder of True Identity, the first intersex organization in Zimbabwe that promoted community awareness of intersex issues and advocated for the dignity, rights, and well-being of the LGBTQI community. In addition to writing for Shondaland, The Huffington Post, Vogue, and The Root, Ngwaru is also the subject of the documentary She’s Not a Boy, which earlier this year was an official selection at Wicked Queer: The Boston LGBT Film Festival. Follow Tatenda on Instagram: @tatendangwaru.