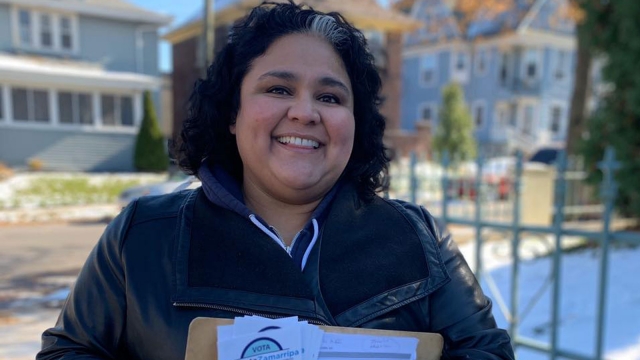 HRC announced its endorsement of JoCasta Zamarripa for Alderwoman for Milwaukee Common Council.

Assemblywoman Zamarripa is one of four openly LGBTQ members of the Wisconsin legislature, and the only person of color or female-identifying LGBTQ member. Elected in 2010, Zamarripa has been integral to the progress LGBTQ people have made in Wisconsin. If elected, Zamarripa will become the first openly LGBTQ member of the Milwaukee Common Council. Over the coming weeks, HRC will be devoting significant resources to turning out the 675,000 Equality Voters across the state of Wisconsin to ensure pro-equality leaders like JoCasta Zamarripa are elected to or remain in office.

“Assemblywoman Zamarripa has been one of our community’s strongest advocates throughout her time in public service,” said HRC Wisconsin State Director Wendy Strout. “Milwaukee has become a true regional leader for equality. By joining the Common Council, Zamarripa will only continue to move that pro-equality agenda forward. We are proud to endorse Assemblywoman Zamarripa’s bid for Common Council and look forward to working with her in her new role.”

“I am honored to receive HRC's endorsement in this race for Alderwoman,” said Assemblywoman JoCasta Zamarripa. “During my time in public service, we have worked for hand in hand to advance equality for everyone. If we are successful, I will be Milwaukee's first out LGBTQ Alder and a stalwart advocate for equality across the city of Milwaukee.”

HRC has prioritized investments and organizing in Wisconsin since 2017, and had 17 staff on the ground in the state in the closing weeks of the 2018 election. In the midterm elections, HRC members and supporters completed over 1,480 volunteer shifts. In the final four days of GOTV alone, our staff and volunteers knocked on over 11,300 doors. Members and supporters also sent over 52,000 text messages to voters in the final weeks with voting resources. Since launching, we've helped over 1,500 Wisconsinites register to vote by mail, online, and at in-person events. HRC hosted 22 Equality Action Academy trainings to give HRC members and supporters the tools they need to take action locally in legislative advocacy and in support of pro-equality candidates.

In the 2018 midterms, HRC helped register more than 32,000 voters and recruited more than 4,200 volunteers, who worked over 8,500 shifts and clocked more than 30,000 volunteer hours. In the critical final four days of the campaign, HRC staff and volunteers in get-out-the-vote efforts alone knocked on more than 80,000 doors, and held 36,400 conversations with voters at their doors and by phone on behalf of our endorsed candidates. HRC's unprecedented grassroots mobilization represented an investment of approximately $26 million to recruit volunteers, mobilize constituents, register voters and grow the organization's grassroots army in an all-out effort to pull the emergency brake on the hateful anti-LGBTQ agenda of the Trump-Pence administration and elect a Congress that would hold them accountable.