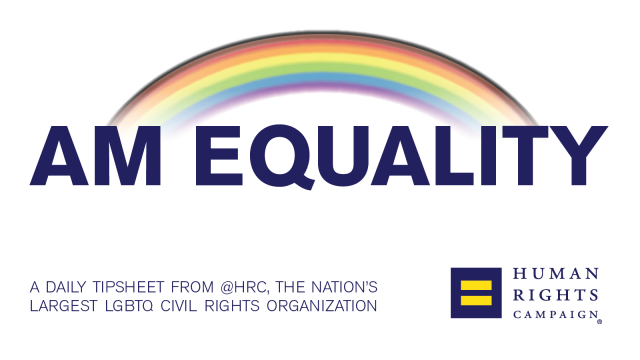 HRC WILL POSTPONE ALL PUBLIC EVENTS THROUGH THE WEEKEND OF APRIL 4: “We are facing a global health crisis, and the Human Rights Campaign’s number one priority is to look out for the health and safety of our members, supporters, staff, the LGBTQ community and the community at large,” said HRC President Alphonso David (@AlphonsoDavid). “For that reason, we have decided to cancel or postpone all of our public events through the weekend of April 4, including our large-scale fundraising dinners in Nashville on March 14, Los Angeles on March 28 and Houston on April 4.” More from Out & About Nashville, The Hollywood Reporter and HRC.

Our focus remains on advancing the rights of LGBTQ people around the world & defeating Trump-Pence in November. We will continue to work toward this goal, & weather this crisis as we have weathered crises before — by remaining united as a community.

FAME MONSTER FRIDAY -- NEW SPECIES OF INSECT NAMED AFTER LADY GAGA: The Kaikaia gaga, a Nicaraguan insect, is known for its bright colors and the sing-song sounds it makes to communicate with others of its species. More from LGBTQ Nation.

So thrilled that "my" newest baby is making headlines, she deserves all the attention! Not to shamelessly self-promote, but I really love this graphic! #Kaikaiagaga #treehoppers #bugpop https://t.co/J1eWbIhUzF

NEW YORK TRANS WOMAN AWARDED $50K AFTER FILING COMPLAINT FOR HOUSING DISCRIMINATION: Giana Desir endured multiple experiences of discrimination and harassment, including sexual harassment from a real estate broker and being told she could not live “around children.” More from LGBTQ Nation.

NEW STUDY FINDS THAT LGB TEENS ARE MORE LIKELY TO EXPERIENCE SEXUAL ASSAULT COMPARED TO THEIR STRAIGHT PEERS: The study used data from the CDC which did not ask respondents about their gender identity. More from LGBTQ Nation.

SOUTH CAROLINA DISTRICT COURT STRIKES DOWN ANTI-LGBTQ CURRICULUM LAW: The law, which prohibited discussion of LGBTQ identities unless in the context of STDs, was declared unconstitutional. More from The State.

NEW YORK TO ALLOW TRANS MINORS TO UPDATE BIRTH CERTIFICATE WITH PARENT PERMISSION: According to Lambda Legal, the change also does away with a previous requirement for people to have medical affidavits before updating their documents. More from NewNowNext.

DISNEY CEO TO PERSON AT SHAREHOLDER MEETING ASKING FOR LESS LGBTQ CONTENT: “At Disney we strongly believe that we should reflect in our creative content the diversity that we find in our fan base and with our audience,” said Disney CEO Bob Chapek. “And I believe that will continue with an increased commitment as we move forward. ... We believe we want to tell stories that our audience wants to hear and that reflects their lives.” More from Yahoo.

EVERYTHING’S QUEERER IN TEXAS -- QUEER EYE RETURNS FOR A 6TH SEASON: More from The Advocate.

GHANAIAN GOVERNMENT BANS LGBTQ GATHERING, WHICH COULD HAVE BEEN FIRST OF ITS KIND IN WEST AFRICA: The ban was in response to anti-LGBTQ religious groups. More from Openly.