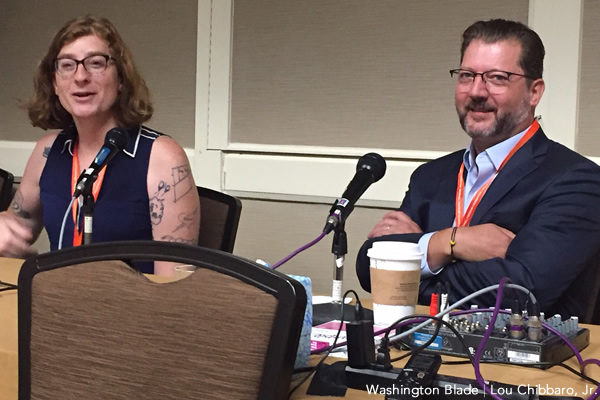 Organizers said more than 400 people from throughout the country turned out for the summit, which is organized each year by the Woodhull Freedom Foundation, a national nonprofit group that advocates for sexual freedom as a “fundamental human right.”

Grosso and his legislative assistant, transgender activist Darby Hickey, spoke as panelists at one of the summit’s workshop sessions called Removing Criminal Penalties for Sex Work in D.C. The two spoke about their effort to build community support for a bill first introduced by Grosso in 2017 to decriminalize sex work in D.C.

Grosso and others speaking at the summit noted that existing laws criminalizing sex work disproportionately impact LGBT people, especially transgender women of color, who often engage in sex work as a means of economic survival.

That concern was highlighted in a separate workshop session called “LGBTQ Criminalization: Why sex work is a central LGBTQ Issue.”

Kendall, former executive director of the San Francisco-based National Center for Lesbian Rights, and Smith, the executive director of the statewide LGBT group Equality Florida, each received the Woodhull Freedom Foundation’s 2019 annual Vicki Sexual Freedom Award at a plenary luncheon session on Saturday, Aug. 17, for their years of work, organizers said, in advancing the LGBT rights and sexual freedom movements.

Kendall and Smith spoke before all conference attendees on a panel moderated by longtime lesbian activist Carmen Vazquez, who serves as co-chair of the Woodhull Freedom Foundation Board of Directors.

“The oppression of LGBT people, the attempts to psychologically torture, to religiously scar people to suppress their sexual orientation absolutely goes hand in hand with this conference,” Smith told the Washington Blade after speaking on the panel.

“All of the enemies that align themselves to do harm to us and do harm to our loved ones are the same,” she continued. “And they’re driven by the desire to control people and to compel them to conform and to live their ideology and their religious beliefs. And we have a duty to link arms in these dangerous times and push back.”