Lilli Vincenz to be inducted into LGBTQ Journalists Hall of Fame 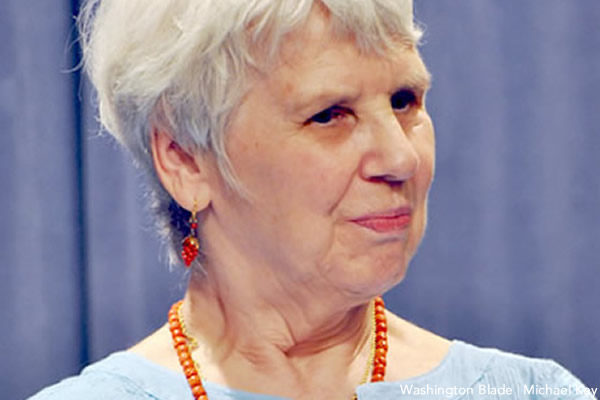 Lilli Vincenz was one of the first in the LGBT rights movement to write about and film LGBT-related events and activities beginning in 1962. (Washington Blade file photo by Michael Key)

The National Lesbian and Gay Journalists Association announced it will induct LGBT rights movement pioneer and journalist Lilli Vincenz of Arlington, Va., into its LGBTQ Journalists Hall of Fame.

“Vincenz is a path-breaking journalist and pioneer of the gay right movement beginning in the early 1960s,” NLGJA said in an Aug. 14 statement announcing Vincenz is one of three people to be inducted this year into its LGBTQ Journalists Hall of Fame on Aug. 31.

The statement notes that Vincenz became one of the first in the LGBT rights movement to write about and film LGBT-related events and activities beginning in 1962 in Washington and other cities.

“She joined the Mattachine Society of Washington in 1962 as one of their first lesbian members and served as editor of their monthly magazine, The Homosexual Citizen,” the NLGJA statement says. “In 1966, Vincenz became the first woman, with her face recognizable, to appear on the cover of The Ladder, a lesbian magazine,” it says.

“She filmed the 1968 Annual Reminder in Philadelphia and the first Christopher Street Liberation Day march in 1970,” the statement says, referring to the pre-Stonewall annual homosexual rights demonstration held in front of Philadelphia’s Independence Hall that early homophile movement activists began in 1965.

Organizers ended the event in 1969 after the Stonewall riots in New York triggered what many consider the modern LGBT rights movement.

Vincenz joined D.C. gay rights pioneer Frank Kameny, co-founder of the D.C. Mattachine Society, in New York in June 1970, when she filmed what turned out to be the first anniversary commemoration of the Stonewall riots in the form of the Christopher Street Liberation Day march and rally.

“Her films contributed to a priceless visual archive of the gay rights movement and were donated to the Library of Congress in 2013, along with documents, photographs and memorabilia covering 50 years of America’s LGBTQ civil rights movement,” NLGJA’s statement says

The statement notes that Vincenz wrote a bi-weekly column for the New York-based GAY magazine in the years following Stonewall and became a frequent contributor to other community publications.

It also notes that in October 1969 Vincenz co-founded the Gay Blade, an independent gay publication that later evolved into the Washington Blade, which will be celebrating its 50th anniversary in October.

NLGJA’s selection of Vincenz for its LGBTQ Journalists Hall of Fame follows several events and actions recognizing her contributions to the LGBT rights movement organized by the updated version of the Mattachine Society of Washington. Charles Francis, the group’s leader, says it’s dedicated to preserving archival documents chronicling LGBT history.

Francis said the group earlier this year produced a video called “Lilli’s Legacy,” which highlights the documentary films she made of the Christopher Street Liberation Day march in 1970 and the 1968 Reminder event in Philadelphia. The Mattachine video includes tributes to Vincenz by U.S. Sen. Tammy Baldwin (D-Wisc.) and historian Lillian Faderman.

LGBT rights advocate and NLGJA member Bob Witeck said he has known Vincenz for many years.

“I consider Lilli truly significant in America’s civil rights story,” Witeck said. “She not only was an early and bold activist in a movement dominated by gay white men, she was instrumental in recording and capturing our fledgling activism,” he said. “That makes all the difference in the world about the power of a small group of people to light an unquenchable flame.”

In addition to Vincenz, NLGJA named gay journalist and longtime Miami Herald reporter Steve Rothaus and lesbian journalist Kara Swisher, who specializes in business and technology reporting, as its 2019 inductees to the LGBTQ Journalists Hall of Fame.