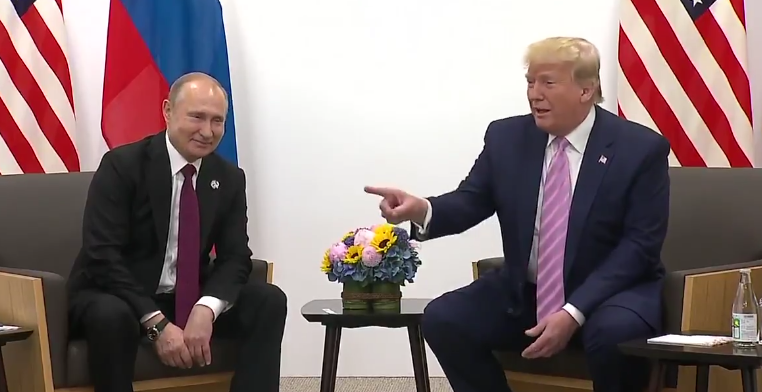 US President Donald Trump has appeared to make light of Russian election interference during a meeting with the country’s leader, Vladimir Putin. A smirking Mr Trump wagged his finger at the Russian president and said: “Don’t meddle in the election, please.”

The pair were holding talks on the sidelines of the G20 summit in Japan. It was their first meeting since Robert Mueller concluded his investigation into alleged Russian interference in the 2016 US presidential election.

US intelligence agencies concluded that Russia was behind an effort to influence the presidential election with a state-authorised campaign of cyber-attacks and fake news stories planted on social media.

As the 2020 election approaches, Trump has been under increasing pressure publicly put Putin on notice that the U.S. won’t tolerate election interference again. As they sat together in Osaka, Trump didn’t broach the topic, instead relishing in the attention of reporters and camera crews eagerly capturing every moment between the leaders of the two former Cold War foes.

“It’s like the Academy Awards,” Trump said to the Russian president. Then he called it a “great honor” to be with Putin, praising their “very, very good relationship” and predicting “a lot of very positive things” would result. As reporters shouted questions and cameras clicked, Trump cocked his head when asked by NBC News whether he would tell Putin not to interfere in the vote next year.

A reporter asks President Trump if he would tell Russia not to meddle in the 2020 US presidential election.

As President Putin, Sec. Pompeo and others smile, President Trump turns to the Russian delegation, points and tells them not to meddle in the election. pic.twitter.com/lfcBwDJ1r6

“Don’t meddle with the election,” US President Trump told Russian President Putin, with a smirk and a finger point.

Trump also bonded with Putin over a scorn for journalists.

“Get rid of them. Fake news is a great term, isn’t it? You don’t have this problem in Russia, but we do.”

“We also have,” Putin answered, in English. “It’s the same.”

They shared a chuckle. pic.twitter.com/atGGYxnwfc